“Take a picture of that one, Daddy.”

If I had a dollar for every time one of my kids pointed to a flower beside the Spring Creek Trail outside of Kannarraville, UT, and asked me to take a picture, I’d have 82 dollars. At least, that’s how many flower pictures I had to sort through when we got back home.

This hike was actually our second attempt at Spring Creek. The first one, several years earlier, had ended with a round of “I’m tired” choruses about 300 yards into the hike. For our second attempt, I was determined to actually make it into the slot canyon portion of the trail.

With that definite goal in mind, I briefly considered a solo hike. It was already late in the afternoon, and I knew that hiking 4 miles before dark would be a challenge if I were dragging kids along. But guilt at strapping my wife with them in addition to the evening chores she wanted to stay home to do was more than I could bear. Before I agreed to take them, however, I elicited firm agreements from my young children that this would be a “serious” hike, one focused on reaching a specific destination, and that I wouldn’t be putting up with any whining, dilly-dallying, or related tom-foolery. In other words, I was doing a solo hike, and they were welcome to come as long as they didn’t interrupt it.

The related tom-foolery started almost as soon as we left the trailhead parking lot. Scarcely had we crested the mild hill that obscures the mouth of the valley entrance than one of my darlings declared their need for alimentary elimination. After explaining that there were no facilities constructed for that purpose, dealing with the outburst of indignation that followed, and directing said darling to a convenient shrub a suitable distance off the trail, we waited. And waited. And waited some more.

Eventually, the darling returned. Apparently, pointing your kid towards a cactus patch for such an occasion is not only lousy parenting but also leads to a prolonged search for a “safe” place to take of business.

Mission accomplished, we proceeded up the trail. At the 300-yard mark, I heard a child inhale, and their lips began to form the word, “I’m.” I stopped the rest of the statement with a mean-eyed stare that would have made Clint Eastwood proud. 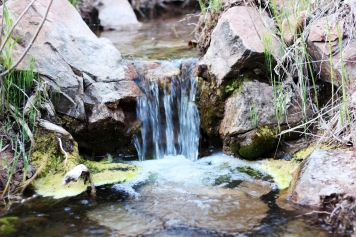 …another 50 feet. There, twinkling merrily in the afternoon sun, was the first of what would be several intersections of trail and creek. Clear, cold, and narrow, Spring Creek crossed the trail, burbling among the convenient rocks someone had thoughtfully placed for hikers to cross on and keep their feet dry. Some, however, eschew such conveniences and we continued past the crossing with three pairs of dry feet and one pair partially soaked and picking up a fine accretion of red-tinted dirt. I knew it would look exquisite smeared over the tan interior of our vehicle.

And, yet, we were still going. At this point, a good 55 feet farther along than our first attempt, we came up the first stunning example of native flora.

“Take a picture, Daddy! Then we can show Mommy!”

Having placed my trusty DSLR in the pack, I had to briefly weigh the benefit of stopping, opening the pack, getting the camera out, and taking the picture to satisfy the oh-so-sweet desire of my daughter to share this moment with her mother against the near certainty that, while the pack was open, the treasure trove of snacks said mother had packed would be spotted. I knew that, even if they caught just a bare glimpse, there would be nothing preventing a ten-minute feast of tangerines and chocolate-covered granola bars.

“The lighting’s no good for a picture right now. We’ll stop on the way out.”

Five minutes, 15 flowers, and 98 yards later, we stopped for snacks in the shade of a juniper tree.

As tiny, chocolate-smeared mouths chomped enthusiastically and clear water turned suspiciously cloudy as cups were raised and lowered, another family hiked by.

At this point, I should probably explain that my family is not poor. You wouldn’t know that to see us in our hiking outfits, however. My stain-encrusted t-shirt could have passed for desert camouflage, though it had started life as pure as the driven snow. One kid had on pants she’d outgrown two years before, which I figured mostly made them capris. Another refused to wear any other shoes and thus had on some cute canvas flats with giant, rainbow-colored bows still peeping out from the red mud. The coup de grace was the dust-flecked snot trail running down a poorly-wiped nose and cheek that blended incredibly with the chocolate ring around a mouth.

Anyways, this family that passed us as we enjoyed our snack looked like they’d stepped out of a hiking magazine marketed solely to upper-crust western families who’d made their fortune investing in Columbia, Merrell, and Osprey stock and then received a bunch of promo gear from the companies and an invite to be a part of an upcoming ad campaign. They were serious about this hike and seriously equipped.

I tried to hide my face behind my thrift store farmer’s hat, waving a greeting that I hoped clearly communicated that we actually weren’t homeless and living off the land back here but also discouraged further conversation. My kids, however, waved enthusiastically, calling out hellos. Embarrassed into interaction, I wished the family a good hike and a good evening. They all smiled, waved, and hurried down the trail before they could catch whatever it was we had.

Snacks finished and thirst quenched, we carefully gathered all of our detritus and stowed it back in my pack. I pulled out the camera, and we continued.

We came across a section of trail that was covered with some of the most perfect sand ever discovered. It was perfect for running through fingers, drawing fun shapes in, and throwing at your siblings.

I hurried the kids along before our free hike could be encumbered by an optometrist’s bill.

We came to a spot where the trees arced gracefully overhead and almost formed a tunnel for us to walk through. It was the kind of place that I had loved as a kid. A place alive with possibility, precociously stirring the soul with vague glimmers of romance, danger, and mystery. 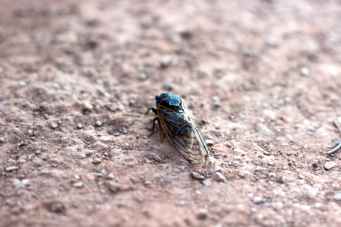 And alive with bugs. Cicadas to be exact. The kids took turns urging one another to touch the rattling things while I snapped a few pictures. We laughed whenever the loud buzzing the followed a hesitant touch drew shrieks of semi-delight from whichever one had gathered enough courage for the act.

And we continued down the trail. After another creek crossing, this one mercifully dry, we found another bug, a butterfly. One of the darlings wanted a picture of it but, after chasing the manic creature for a few minutes, we concluded it was camera-shy and started walking through a grass and sage meadow.

Ahead, we could finally see what we thought was the entrance to the slot.

It was almost wholly obscured by a sandstone outcropping that bulged towards the south rim, but we were soon past the obstruction and into the canyon. The creek that had flowed narrow in the wider valley below spread out here, tripping over smooth rocks between the walls of the canyon. A brief duck under some low-hanging branches and we were in a clearing. A brushy embankment covered the north side, but the south side was an exposed face nearly overhanging the creek as it meandered gently. 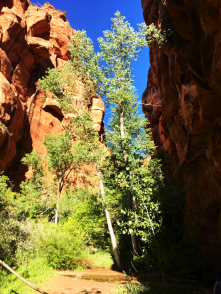 We stopped and threw rocks in a bend of the creek, scrambled onto the narrow bar between two channels, and floated leaf boats in regatta races. The lowering sun shone perfectly through sheltering leaves and glinted off the peaks of tiny ripples in the stream.

Realizing the sun was sliding inexorably towards the horizon, I gathered my brood and continued, certain that we hadn’t reached the best part yet. But, as we pressed on into the canyon, the walls narrowed occasionally, but never all the way to a “true” slot.

We came to a sand-slide and scrambled up it to explore. At the top, a small cave with a triangular maw greeted us. A brief discussion ensued, mostly concerning who the mountain lion who undoubtedly lived inside would eat first. Anxious to prove the non-existence of said big cat, I crawled in, my heart beating a strange rhythm in my chest and my hands unusually sweaty. When no yowls or claws greeted me, I coaxed my kids into at least peeking in. They did, and then we all clambered back down the sand, filling our shoes and “accidentally” flinging it down the back of the person in front of us.

At the bottom of the slide, we paused to let another party, one we could hear coming but not see, pass. As they emerged from the foliage to the east, I recognized them: it was the ad campaign crew. One kid was yelling at a sibling, and the dad was red-faced, packing another. Mom huffed as she passed by. I asked how it was farther up, and she said that they hadn’t made it much farther so couldn’t really say.

My competitive fire stoked, I urged the kids to tackle the trail again. We passed another interesting branch off the main trail, but I resisted the calls for another exploration. The sun was sinking, and we didn’t have much more time before we’d need to turn around.

“Dad, can we go back and race some more boats?”

“Well, what if we go back there now?”

“We’re so close to the actual slot! Let’s keep going.”

“Daddy, take a picture of that one!”

“If you kids keep going and don’t stop and don’t whine, we’ll go get ice cream when we get back to town.”

“Daddy, which nature souvenir would you like better: this snail shell or this flower?”

I sighed. And thought. And stopped.

We were on a broader section just before a bend. The south wall had crumbled down enough that I could see what lay ahead. It looked like a narrow cut started right there, maybe 100 yards away. I was convinced this was the section I’d wanted to reach.

But there was my child, not looking up, not looking around. She was simply contemplating a plain, brown shell and a purple flower not unlike 562 others we’d already passed. And she was content for one of those two items to be her memento. There was no competition, no inferiority complex, no destination that mattered nearly so much as the decision, right now, between a spiral of calcium carbonate and a semi-crushed splot of petals and pollen.

I told her I’d pick the shell, told my son we’d go race some boats, and assured my oldest that we’d take pictures of each flower she wanted to on the way out. 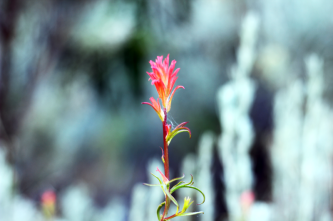 Then we turned and, backs to whatever lay beyond the bend, headed out the way we’d come in, committed to nothing more than making memories.

And getting some ice cream.

Disclaimer: This post IS based on an actual hike. It IS NOT a 100% accurate portrayal but is semi-fictionalized because, as Mark Twain is frequently (but dubiously) cited as saying,

“never let the truth get in the way of a good story.”

But, don’t let that distract you from the fact that there is Truth. Thanks for reading!

I am a sinner saved by grace, husband to Meaghan, father of Maeli, Bennett, and Moriah, and pastor of Red Hills Church in Cedar City, UT View more posts