“Why do you even let people see you with that drunken whore!”

The exclamation burst from taut lips with an explosive, yet strangely precise, force: like a demolition charge carefully placed to produce exactly the intended destruction and no more. The eyes above the lips flashed intensely in the harsh white light of the study hall, unrelenting in their glare.

“…see her like you do!? I know, you’ve told me that before. It’s like you don’t even care what people might think of you! For that matter, what they might think of me! I’m trying to be reasonable here, but she’s making it incredibly difficult! All that, ‘It’s all cool, just walking the path, enjoy the journey’ mumbo-jumbo! Does she even know how to read? Does she understand how important it is to use even a little bit of logic? Could she, just once, say something clearly?”

He sighed. She was so hard to deal with when she got like this. “It’s like she knows everything without knowing anything, all at once,” he thought again. For the millionth time.

“Well, just give her a chance, you’ll come to love her, trust me.

“That’s highly unlikely! Face the facts: I am the only one smart enough for you!”

With this final outburst, she spun around and stalked off, the close, white walls echoing the staccato rhythm her heels beat out on the polished floor.

“Look, I don’t know why you waste your time with her. I mean, she’s obviously too stuck-up to ever, you know, get it.”

The words dripped out of lips slick with liquid sheen from a recently sipped IPA.

He started to reply, but the far-off glint in her eye told him she was just getting started. He stopped.

“It’s like she thinks she’s better than everybody. You’re not like that, you know, you’re more like Jeff who works down at Daily Grind. You know him…the one with the cool half-sleeves. Yeah, he’s the one that started the Bible study I’m going to. But don’t worry, he’s totally legit – he does a lot of community service work too. He’s trying to be incarnational and all that. I’m really into what he’s got going on.”

He seized his chance to break in on her ramblings: “Well, maybe you’re being a little too hard on her. I think if you two had a chance to sit down and talk, you might have a lot in common.”

The sip his interruption made possible was almost spewed by her raucous laugh.

“Her!? Talk to me!? No way she’d ever do that. Not sure if I’d even want to even if she did. I mean, how many people has she hurt with all her rules and stuff. No thanks, I’m good. And hey, I’ve got you and what more could a girl ask for. And for that matter, you’ve got me and you know I’m cool.”

She tilted the bottle up for another taste but stopped with the amber liquid just short of her lips. Lowering it slightly but still talking around the bottle she asked, “On another note, you want one?”

“I heard you went and saw that shameless hypocrite again.”

The words dripped with acid and accusation.

The rigid certainty in her words is backed up by a stern glare. Her eyes bore into his.

“Don’t judge her so quickly. Remember that everyone starts somewhere.”

“But she shouldn’t set up camp and stay there. It’s like she doesn’t even care about anything other than just looking good. How she fools everybody is beyond me. Give me a few minutes with her, I’ll set her straight.”

He tried to be gentle, “You already tried that, remember? You said hello and then proceeded to yell at her for like ten minutes straight about proper dress, proper behavior, proper everything. She just laughed. Remember?

“Yes, I do. And that’s all the more reason for you to stop associating with her. Did you know I heard that she was friends with that gay guy? You know, the one who’s always going on about it. Yeah, apparently she thought it would be a good idea to ‘have a conversation’ with him. And you associate with her!? I’m not sure I should even associate myself with you if you’re going to insist on this continuing.”

The silence between them stretched awkwardly.

Finally, she turned to leave:

“You know what you need? You need to wake up and recognize that I’m the only one good enough for you!”

After a rushing gesture, and a cautious glance around the door frame, she leaned back inside the office and sighed.

“Seriously! How many times have I told you not to show up dressed like that – Don’t you care about what people will think? You can’t wear that and expect people to follow. You’ve got to dress for success. You’re dressed for work or something but not for success.”

Now it was his turn to sigh.

“Look, I know I embarrass you sometimes, but you need to unders…”

“I know she doesn’t look exactly like you would want, but…”

He didn’t speak quickly enough. Her next barrage started up:

“Doesn’t look like me!? Man, she couldn’t look any less like me! Seriously!? Look, I make this work. Look at these heels! Take a guess at how much they cost?

“Let’s just say a lot. But it’s worth it! You know why? Because when people see that what I’ve got looks good, they want it too. I am an inspiration to millions! That’s more than corpse-face can say. She can barely find her clothes at the store, they’re so out of date. Why anyone, you included, would want to be seen with her is beyond me. So embarrassing!”

With a clearly rehearsed motion, she slid a hand onto his shoulder.

“Admit it: I look good and I make you look good.”

“Look, I’ve had it up to here with all this nonsense!”

The force in her words, though expected, still came as a bit of a shock.

“Why she can’t just leave well enough alone is beyond me. Constantly fiddling about, spouting off about some new theory, some new insight. It’s so pointless! It’s like she thinks she’s impressing someone by rattling off all her facts and theorems. But what she’s really doing is messing everything up.”

“I know we’ve had this conversation before, but…”

She cut him off.

“Yes, we have had the conversation before and that’s just the point: why continually make up new stuff? It’s not just silly, you know it’s dangerous. She could influence others who will start spouting off the same crazy ideas. It’s like she can’t let things be, she’s always trying to restate and innovate and it’s going to lead to trouble, mark my words.”

“But she makes some really good points and she’s got lots of new information.”

“No she doesn’t and I’m getting really nervous with you taking up for her like you are. She’s trouble. Look, why can’t we just go back to the way things were? Wasn’t that simpler, hmmm? Wasn’t it better? Why waste your time with this new whats-her-face when you’ve got me?”

She twisted the engagement ring on her left hand wistfully.

He turned to leave. There was a big day to prepare for and he knew all of this noise would soon fade.

He stood at attention, eyes expectant, heart thrumming in his chest.

This was it, the culmination of more days than he cared to think about, the chance for everyone to see his love for his bride on full display, to celebrate with him this crowning achievement.

The anticipation, heightened by the long wait, was building to a crescendo when the music shifted.

Every eye turned to the back of the room.

There she was, in a white dress so brilliant it made everything behind it seem dull.

He knew it wasn’t traditional, he knew the bride typically came to the groom, but he couldn’t wait any longer!

The room was so large, but he ran.

The crowd was vast, but he ran.

The dignity of the moment was swallowed up by the pure joy and ecstatic love he felt and he ran.

He reached her, his bride, his beautiful bride, and he clasped his arms around her and drew her to himself.

Then slowly, with eyes full of love and pride, he carefully placed his hands on her shoulders and stepped back to arm’s length.

The flashing eyes revealing that keen and curious intellect…

The shining lips smiling for the sheer joy of it all…

The firm set of her jaw, steadfast and resolute…

The radiant perfection truly realized in her beauty…

The timeless features, a testimony to her endurance…

All of them were there and she was stunning.

This was his one and only bride and this was their wedding day!

A voice from the front of the room called out in resonant tones, “Let the wedding feast begin!”

He took her hand and led her joyfully towards the source of the sound.

They reached the table, stretching for miles it seemed, spread with the richest feast imaginable.

He stood together with her for a brief moment of wonder.

Then, with a flourish of his scarred hand, he pulled out a single seat and beckoned her to sit. 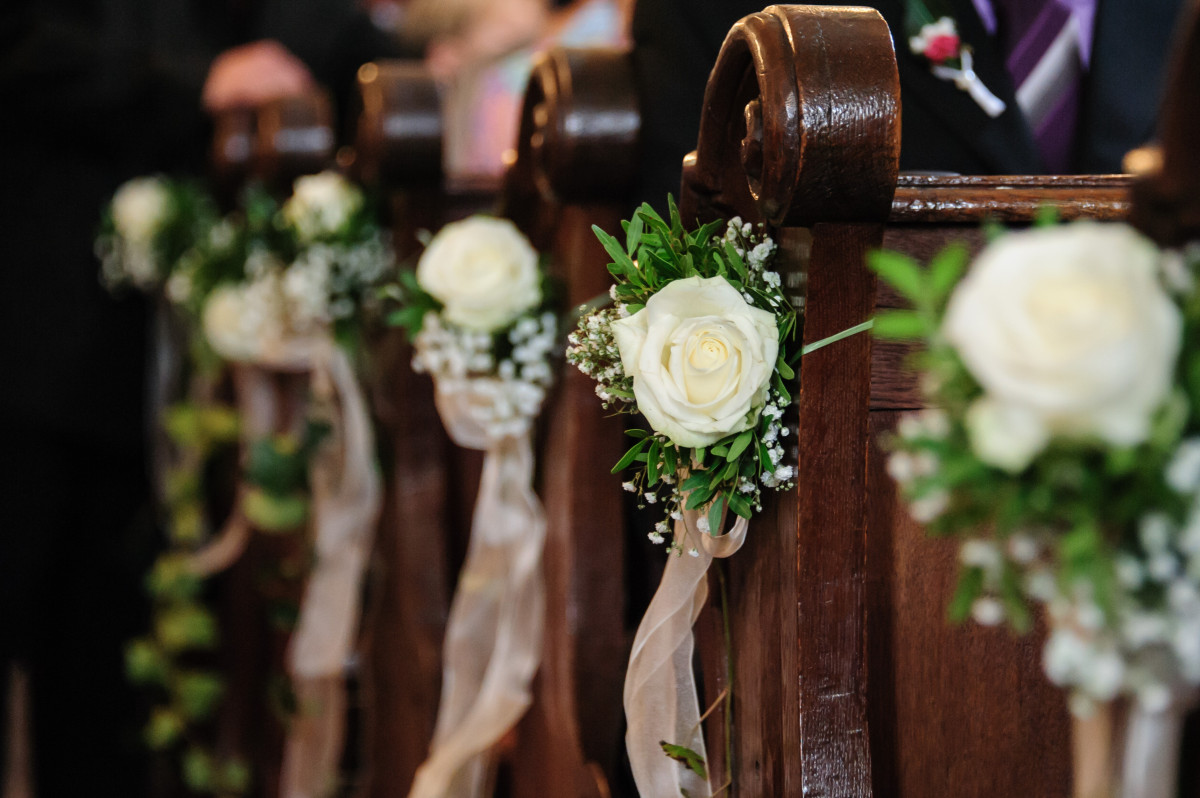 #mc_embed_signup{background:#fff; clear:left; font:14px Helvetica,Arial,sans-serif; }
/* Add your own MailChimp form style overrides in your site stylesheet or in this style block.
We recommend moving this block and the preceding CSS link to the HEAD of your HTML file. */

Want to read more? Sign up for email updates!

I am a sinner saved by grace, husband to Meaghan, father of Maeli, Bennett, and Moriah, and pastor of Red Hills Church in Cedar City, UT View more posts